“The branch that serves you from Poole to Mid Wales”

Please feel free to roam the South West Branch pages and find out what is available to all our members. South West events are open to all MOA members and you are welcome to bring guests and friends from other club and associations.

If you have any questions please do not hesitate to contact any of our branch officers – click “Branch and Port Officers” in the box above, find who you want to talk to and you will receive a quick response

The South West Branch is one of the 6 Branches and 3 Chapters of the Moody Owners Association. For a more detailed description of the Branch and its objectives and services to members, please click on the “Who are we” menu under “More Info” on the menu items above.

Your Branch Needs You!

The current captain of the South West Branch, Neil Ewins, is to spend next year out of the country and may engage on a transatlantic crossing, so he will be unable to continue in the role for 2023.  This means that there is now a vacancy for the post and the branch needs a volunteer to take over the role.  Neil has been our Captain for three years (longer than the nominal 2 years in post) and as with his predecessors has maintained the legacy of the branch in being an active and welcoming group of Moody Owners.  Any new incumbent will, therefore, take over an established branch with enthusiastic members and support from the branch committee and other members.

The branch calendar typically includes 5 rallies, one winter boatless rally (ashore weekend break) and an AGM weekend.  The system of port officers who can advise and assist in setting up the rallies has remained somewhat dormant with the onset of the Covid-19 pandemic and will need reviving. The Captain will chair a committee of a Vice Captain, Secretary, Treasurer and liaise with the SW branch Webmaster and local port representatives. Therefore, the post is not terribly onerous, however, it does require the ability to plan ahead to make these rallies and events successful.

The branch captain is a key post, so it is vital that this is filled.  The important attribute for the incumbent is to be welcoming, able to manage meetings and promote the branch and its activities.

When considering the idea of becoming branch captain, you may wish to reflect on the parable of Everybody, Somebody and Nobody.

If you are interested in undertaking this post, please inform the Branch secretary as soon as possible at sw.secretary@moodyowners.org .  The new incumbent will be voted in at the next South Branch AGM to be held in Salisbury on the 4th February 2023. You can find more details about the AGM by looking at the banner below or clicking here

The 2022/23 MOA South West Branch Winter Weekend Break and Annual General Meeting will be held at the Mercure White Hart Hotel on the 3rd to 5th February 2023.  The White Hart is one of two of Salisbury’s renowned historic coaching Inns and very close (less than a five-minute walk), to the city centre and magnificent Cathedral.  The Weekend starts on Friday evening with an evening meal in pleasant surroundings of a private dining room for an opportunity to interact with other members of the branch and association.  The next day (Saturday) will include a tour of the magnificent Salisbury Cathedral and free time to tour the historic city, browse the shops or take a walk in the local parks to where Constable painted his famous picture of the Cathedral.  On Saturday evening we will hold the South West branch Annual General Meeting, to be followed by a dinner and talk by a local guide on “The Ghosts of Salisbury”.  After the dinner and talk there will be plenty of opportunities to continue the festivities and socialise as desired.  On the Sunday morning there will be an organised walking tour of the city.  Guests would then either depart for their homes, or may stay longer at the hotel to take advantage of the local attractions.

Special preferential all-inclusive rates have been arranged with the hotel for our guests and include: the provision to arrive on Friday until Sunday, with Bed and Breakfast for two days and two evening meals; to arrive on Saturday and leave on Sunday with one nights B and B and the AGM evening meal, and for the AGM and meal only.

All MOA members are cordially invited to this Winter Weekend Break and AGM. (Only South West Branch members may vote on any branch resolution)

Further details can be found here

Our evening meal was on Friday at the Berry head Hotel. This has spectacular views over Torbay.  We had booked the library room with a lovely log fire to keep us warm. 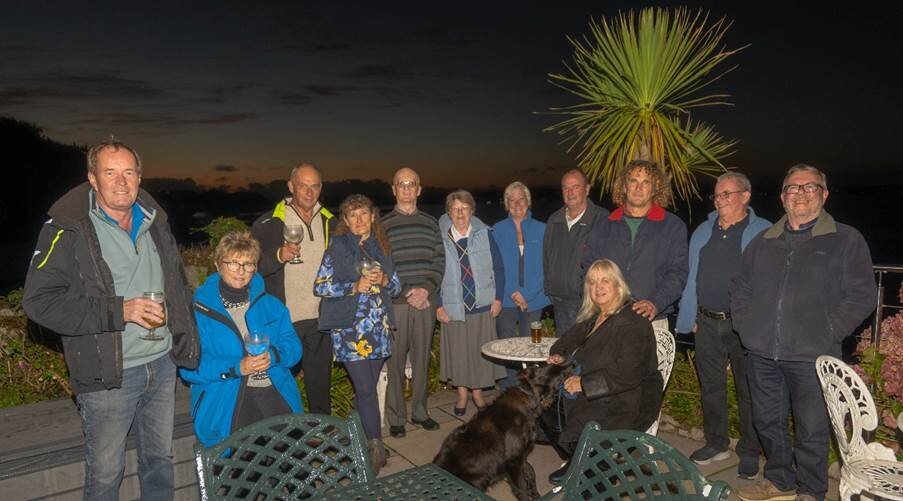 Mid-day on Saturday, we started to set up for the pontoon party but the October weather had other ideas. So rather than rain stops play we managed to get every one packed into Sea pigeon. Luckily our Moody came with a fantastic big Bimini cover.

This rally has had to be cancelled as it has not been possible to secure visitors berths at any of the marinas in Plymouth.

You can now order a range of leisurewear such as rugby shirts, polos etc, in addition to waterproof crew bags with the SW logo and

your boat name embroidered* on them. We had a direct link to an order page, however, because of low volume this has lapsed, hence to order you should call Kitz UK.

Please note that Kitz UK is an external company and apart from providing this leisure ware, has no relationship to the MOA.

If you have any queries, please contact the SW webmaster at sw.webmaster@moodyowners.org